My last post mentioned some of the mold issues we had in the house.  I had a remediation specialist check things out, and apparently it isn't that serious, is really just surface stuff, and an easy to buy biocide will kill it all. I am using Microban.  It just arrived today, and I'm actually pretty excited to use it . . . which I admit is a little odd.

In addition to killing the existing mold, I also learned that the relative humidity needs to be below 60% in order to prevent new mold growth.  I bought this dehumidifier from Lowe's and installed it in the basement. It had a digital readout that says what the current humidity levels are. When I first started it up, it read 88%.  So I let it run, left the house and came back the next day and the bucket was full of water, and the humidity had barely changed.  Fortunately the dehumidifier had a place to put a hose, and a built in pump to get the water out. I hooked it up, found a floor drain, ensure it was working properly, and left.

I returned two days later, hoping to find a dry basement.  I should preface this with a confession. I hate old basements and crawlspaces, I think they are creepy. Even more than I hate old basements, I hate centipedes, big spiders, and cobwebs, which old basements seem to be filled with.  So I cringe every time I go into the basement.  I took a deep breath, tried to ignore about a half dozen of the biggest wolf spiders I've ever seen, and walked down the basement stairs, only to find the hose laying two feet away from the floor drain, and water all over the floor.

As I was trying to figure out what could have happened, since no one had been at the house, something scampered across the room under a set of shelves. I nearly jumped out of my skin, but I didn't literally jump, because then my head would have hit the cobwebs and perhaps a spider or two.  As I caught my breath, I realized that there must have been something living in the floor drain, and I disturbed them when began dumping water on them with the dehumidifier. I put the hose back in the drain, set the drain cover on the hose to hold it in, and got out of that place as quickly as I could.  I knew what I was dealing with, and would catch the culprit another day.

So we returned today and there he was, just sitting beside the drain, waiting to get back to his home. 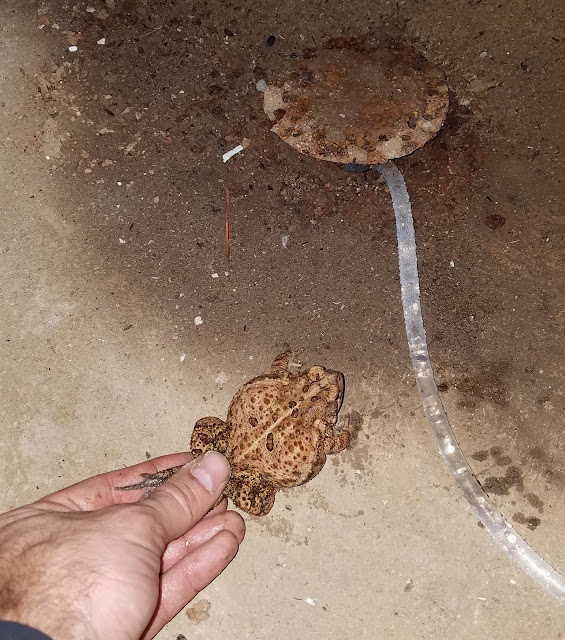 He has a new home now - out in the back yard.  Hopefully he is the largest thing that I ever encounter down there.  I did feel a little bit silly for being startled by a toad.  I don't feel silly about begin creeped out by the spiders.

Tune in next time for more true confessions with Chris.  It would be super fun if you could leave a comment with something that creeps you out.