Behind Schedule . . . but so much fun happening!

The amount of work getting done has really picked up, but we are about 3 weeks behind the schedule I was hoping to be on.  As a result, it's been a lot of late nights, and not much blogging.
We had several rooms upstairs that I decided to strip the wall paper to repair, rather than replace the plaster.  We had a tremendous amount of help from my in-laws, my mom, and my grandma.  It took us two weekends, and unfortunately we lost all of the photos of the first weekend but I managed to capture a couple of pictures of the process on the second weekend.  All of the help was amazing, and I'm sure everyone was pretty sore - I know that I was. 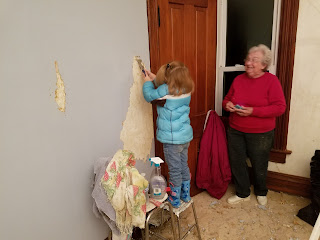 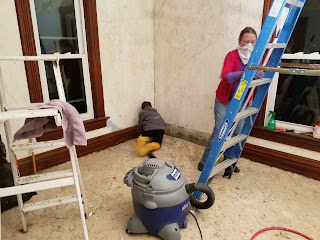 There were at least 2 layers of wall paper, each one painted. We had a steamer, which was a huge help, but sometimes wasn't up to the task either.  I had two remove the border area of one room (3 boarders, 2 of them painted, one with an oil-based primer) with a 1" chisel.  Not fun. The plasterers come tomorrow to tell us if the plaster is salvageable.  It better be!

In addition to house work, there were a couple of fun family milestones.  CJ our oldest turned 10. "I'm finally double digits," he exclaimed all day. I was fortunate enough to be able to work from home, and he insisted that I take him out for Chinese.  He didn't have to work that hard to convince me.  He had a themed party and most of the family came dressed up as Star Wars characters.  I'd post those pictures, but I have a feeling there might be some retribution in some way if I did.  I am super proud of this guy.  Even outside of the house project, it is a pretty busy time in our lives right now, and he is almost always positive, and is a huge helper to his mom and I. 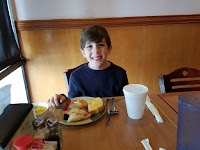 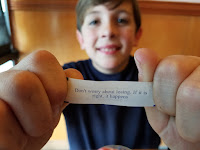 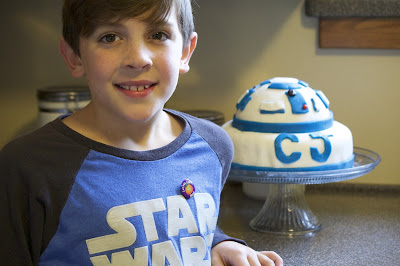 Besides the big birthday, our youngest decided that she was going to start walking.  She quickly figured out that if she could walk, she could also climb the stairs -not good! 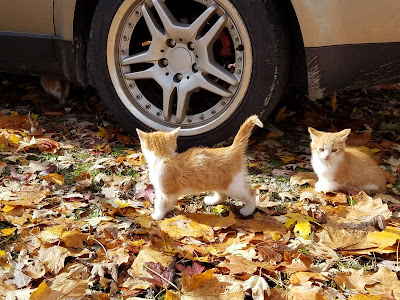 I've started seeing some mouse droppings in the house, so I wanted to get some predators.  I'm not sure how effective these are going to be (we did get a bigger one as well - it's just camera shy), but the kids have already fallen in love.  The kittens were wild, and I wanted to keep them that way, but it seems like that's not going to happen. 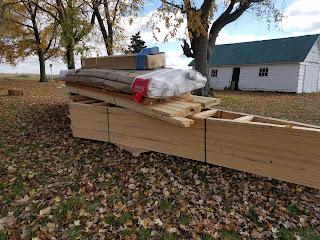 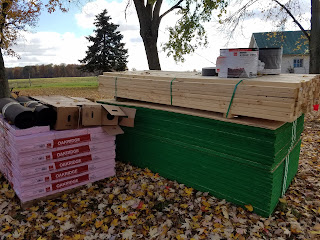 Our new 3-car garage.  The cement foundation is supposed to go in this week, and then the garage will go up the week after that!


Finally, I've been primarily working on demolishing the former downstairs bathroom and laundry room.  We will be converting them into a guest restroom, and separate master suite with walk-in closets.  This part of the project requires gloves, sledgehammers, crowbars, flatbars, reciprocating saws, goggles, respirators, and friends.  Prior to this demo, I had cut out all of the plumbing from the basement, so it just needed to be demolished upstairs.  My brother-in-law, Seth, was working on the electrical to make sure I had power where I needed it, and didn't where I was demoing. 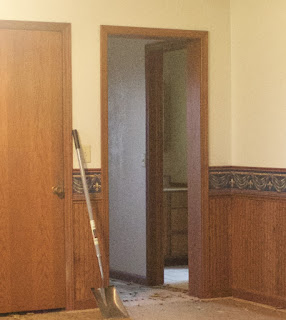 Through that doorway is the bathroom and a hallway to the laundry room. 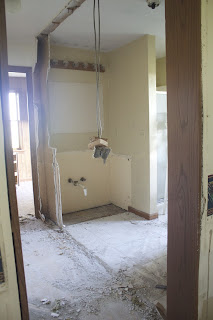 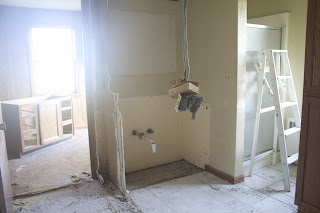 The bathroom lost some of it's privacy.  My dad did most of that work.  Once all of the interior walls were out, I removed the wood paneling from the laundry room area.  I discovered a lack of insulation, and what looked to be some damage because of how the dryer vent was run, so I decided that we needed to remove the drywall on the walls.  It was already my plan to remove the ceiling because we wanted to raise them back to their original 10' height.  Also, I needed the ceiling open so that I could do the plumbing in the upstairs bathroom from the floor below.  I discovered 2 layers of drywall, on top of lath and plaster, on top of 1" thick wide planks.  Tedious to tear off is a massive understatement, but thanks to the help of a few friends, we got it done.  I was pleasantly surprised to fund that most of the exterior walls have adequate insulation. 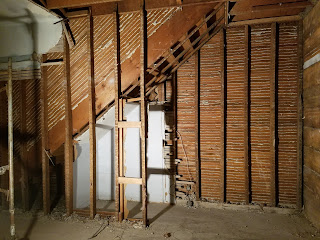 This is where the doorway to the master bedroom will go. 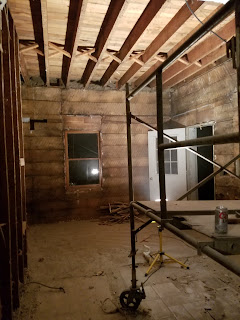 The ceilings are incredible, and appear to be in really good condition.  We are contemplating how we might be able to leave them exposed.  Tomorrow, we begin a similar demo in the rest of the downstairs. . . after work.