Stuck In the Bathroom


So I've pretty much been working on the upstairs bathroom since the end of December.  It is nearly done, and since I've taken so long to do a post, I thought I'd wait for a big reveal.  Vanessa keeps sneaking in and taking pictures and posting them on her social media, so even though it's not quite done, I've decided to post anyway, since word is getting out. 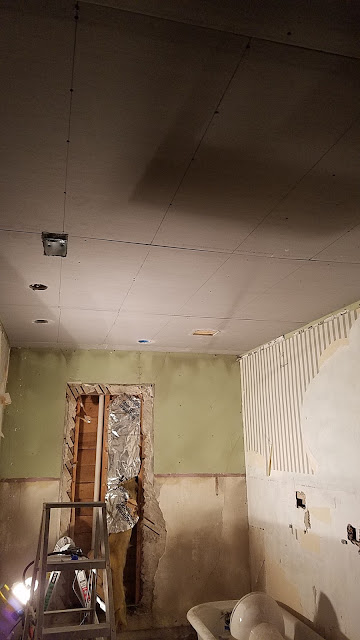 This is what the bathroom looked like at the end of December. 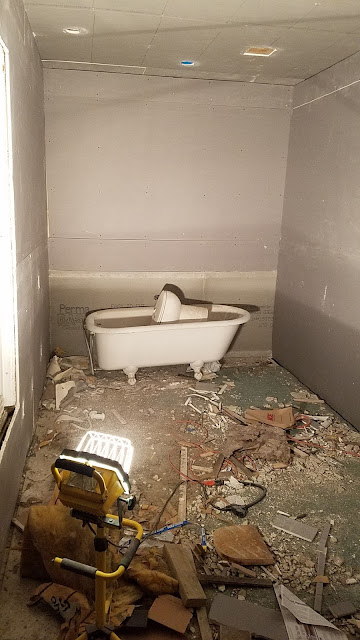 My plasterers called one day to let me know that they had someone delay a job, and that they could plaster the bathroom if I had the wallboard hung.  I told them that I didn't, but that I would by the next morning.  I forgot that Seth was working second shift, so it was just me.  As you can see from the picture, the wallboard got hung (the rest of the room was a mess), but it took me until about 3:00 am.  Ironically, I wasn't sleepy at all until I got done, except for the next morning, when I needed a Red Bull IV. 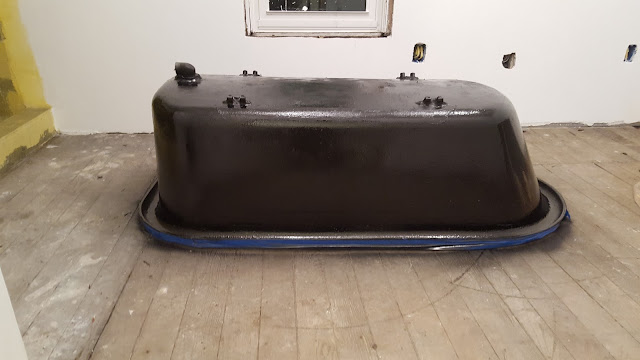 As you can see in the background, the plasterers were able to do their thing, and we got the room cleaned up and all of the old carpet out.  We also managed to salvage the old clawfoot tub that was in the room already. The outside was pretty dingy, and so I painted it black. 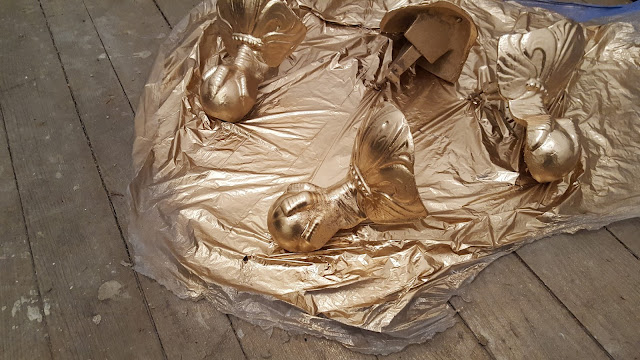 I cleaned up the claws and painted them gold.  I'm pretty sure those are eagles claws . . . this which makes sense, since we are American.  There's nothing that makes a bath quite as relaxing as knowing that your laurels are resting on the talons of a bird of prey. 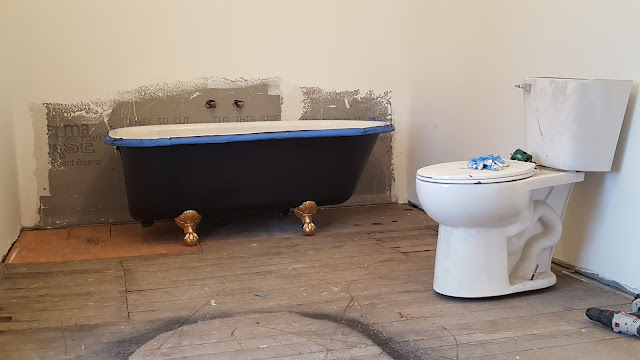 We managed to salvage the toilet from the room as well.  I put them in place and realized that the floor was severely out of level, and sagging in the middle.  I am sure that most of it was due to the age of the house, but whoever first added plumbing on the second floor nearly cut through over half of the floor joists, which contributed to the sagging. 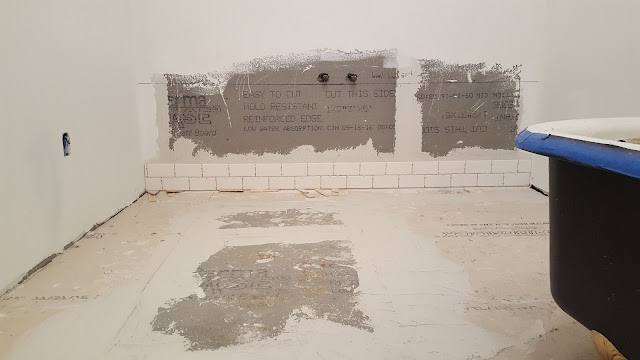 I reinforced the floor joists, and built up the floor so that the sagging wasn't so noticeable.  I also had to make sure that the areas around the tub, sink, and toilet were pretty level. 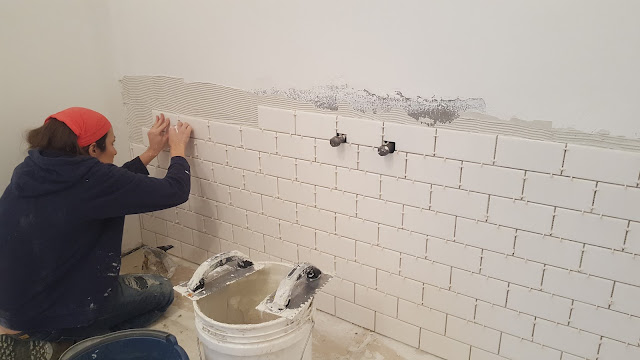 The wall behind the tub is an accent subway tile wall.  I really like this wall, but those little tiles took forever to install. 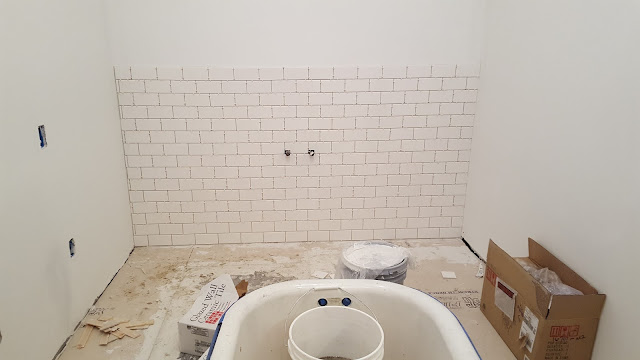 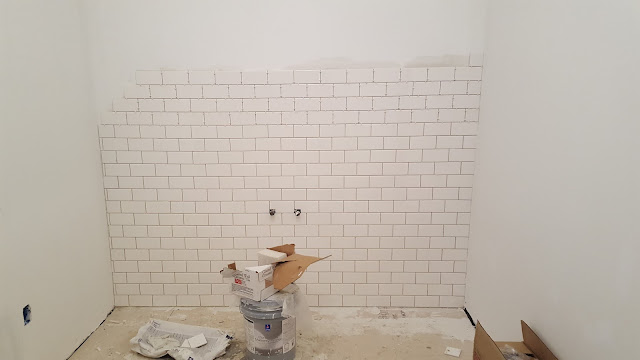 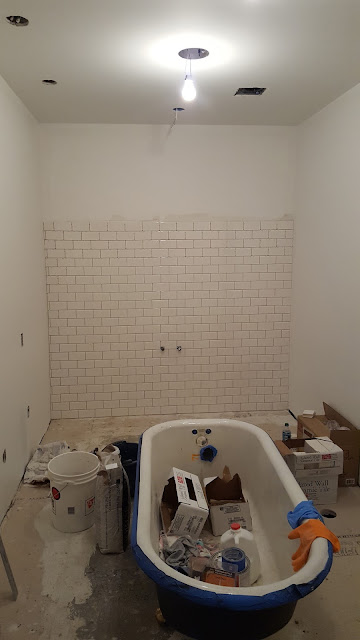 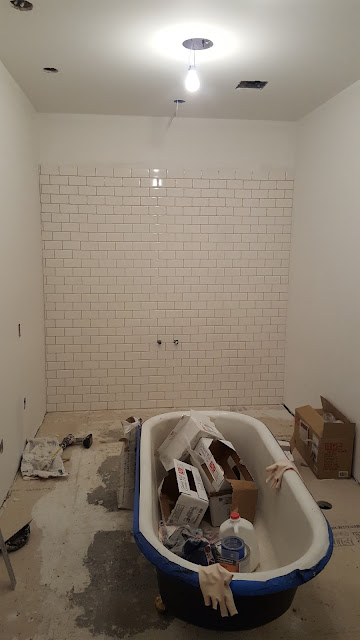 We had planned on going all the way up to the ceiling, but we got to this height, and thought that it was perfect.  I nearly tiled the rest anyway, because I didn't want to feel like a quitter, but I had a shower and the floor to tile, so that took care of those feelings. 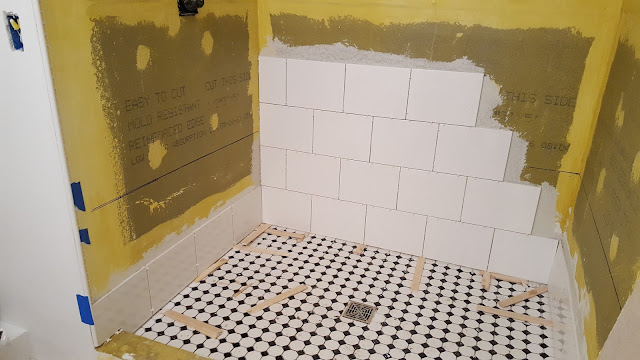 The shower tile were much larger.  There were nine of those little subway tiles for every 1 of the big ones.  I much preferred these - although the smaller ones were more forgiving for any imperfections in the walls. 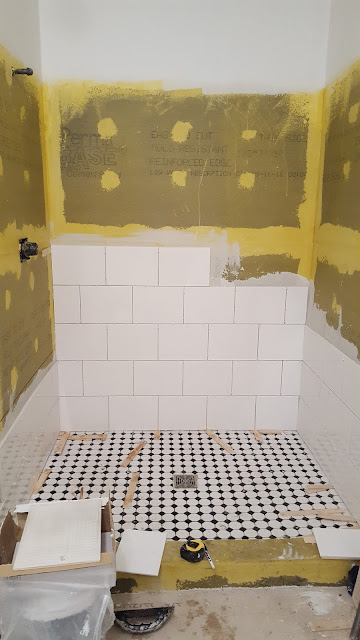 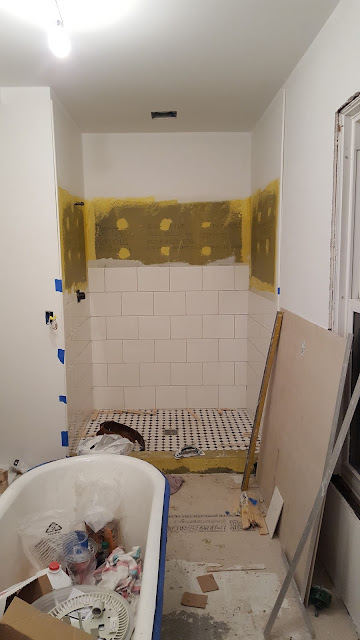 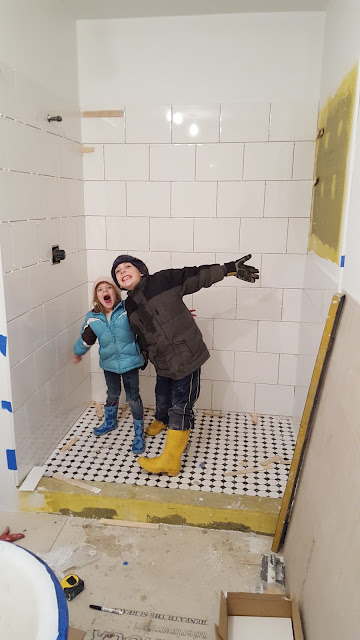 I ran out of tile (actually Menards ran out of tile, and I had to wait a could of days for them to restock) and Cassie and provided some comic relief. 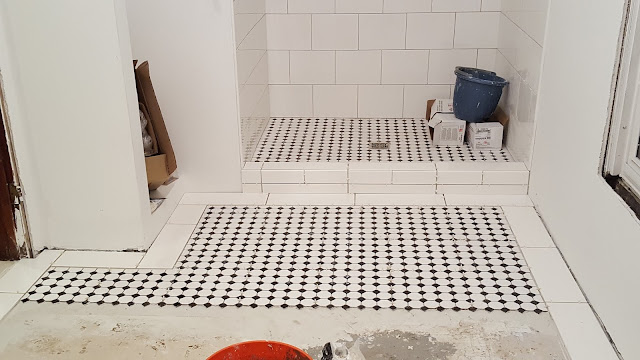 Once the shower was done, I built the curb for the shower, and started putting the tile on the floor.  The white border around the room was my contribution to the design. 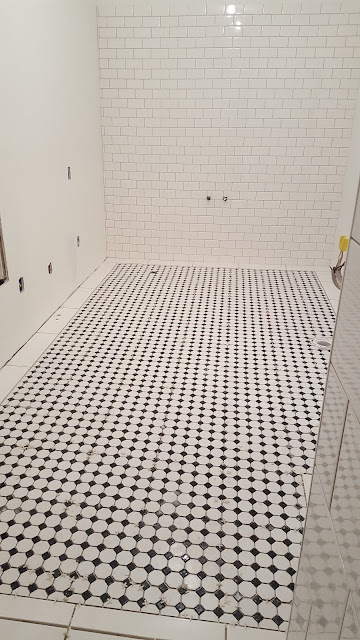 Floor Done. I really wish I would have done this differently. . . I tiled myself into a corner and ended up sleeping in the shower for a night.  Just kidding - I climbed out a window instead.  OK, seriously, I planned my exit, and my last tile was right in the doorway. It fit like a glove, and I was able to go home. 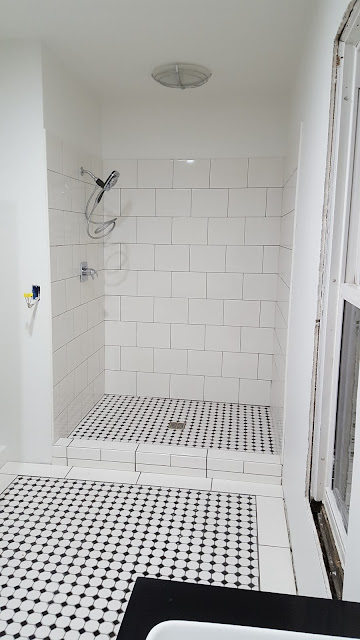 The last two evenings I've been grouting, and once that has cured for 2 days, I'll seal it, and then the tile is wrapped.  As you can see, I got the shower fixture installed too. 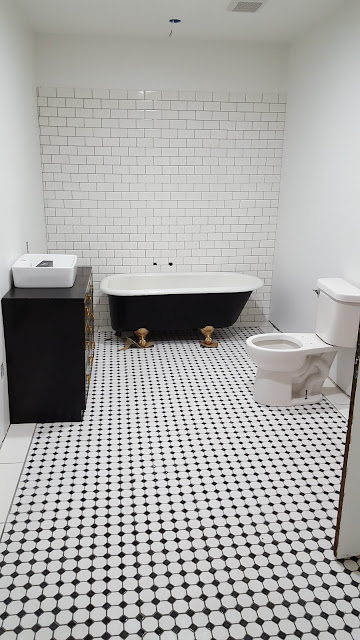 Vanessa got the tub and toilet and but cleaned up, and we put them in place.  I've got some more plumbing and trim work to do to finalize things, and we have a few lights that will go up yet, but this is basically what it will look like. 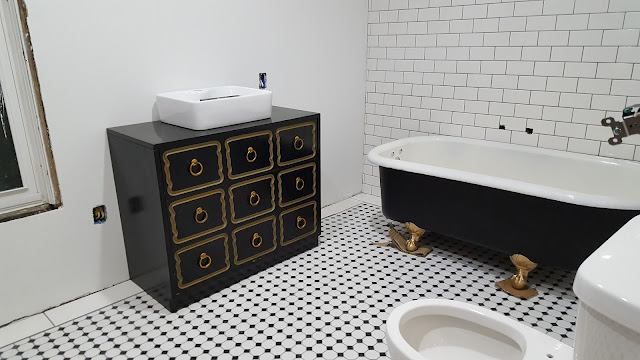 Vanessa found this dresser that we are turning into a vanity.  It is a replica of a designer piece that still retails for a pretty penny. She snagged it for $20 at a garage sale.

It's super exciting to get to this point. We will have this room wrapped up by the end of the week.  Then it's on to refinishing CJ's floors, and then we move downstairs.

There's been a ton of other work that has gone on. Mom, Dad, and Vanessa helped paint nearly all of the rooms, Seth has gotten all of the light fixtures installed, we have carpet ordered and coming within a couple of weeks, the mudroom has been built, the leaking roof is fixed, windows that needed replaced have been replaced, we have water running to the basement, and dad has kept the house cleaned up, as I've made more messes.

We are planning on beginning to move things to the upstairs in March, and be totally moved in before April 1st.

That's it for this update.